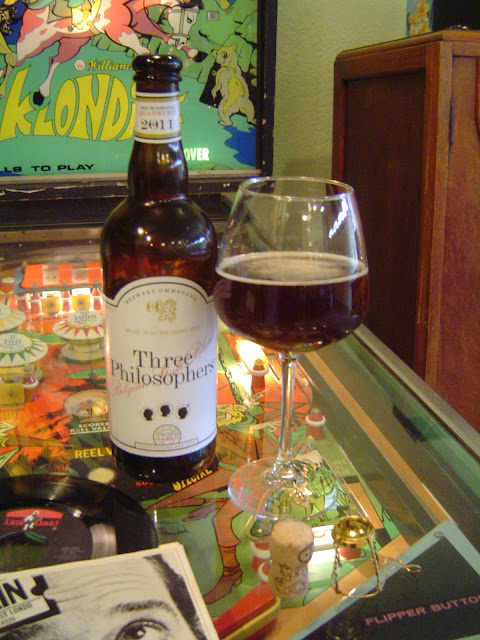 A beautiful Sunday afternoon out here on the left coast.  I've got a beer cracked open to go with a bit of Pinball.  The beer is not just any beer, it is a Belgian style Quadrupel brewed up by the kind folks over at Brewery Ommegang in Cooperstown, New York.  This one comes in a 750ml bottle, is vintage dated and has a champagne style cork and a wire hood.  I decided to pour it into a nice large wine glass instead of a goblet (which is used for most Belgian Quads).  Light carbonation and a great reddish brown color greeted me upon the pour.  Getting my nose down into the glass was a treat - lotsa cherry and malt aromas.  Taking the first sip was heaven, leaving me wanting more.  This beer is very up front and hits you with a ton of flavors immediately as it enters your mouth.  The finish is very quiet, which some would think as a bad thing (no hop bite?  Shame on Ommegang!)  But I love it and it leads me to believe that the brewery got the balance just right on this 9.8% alcohol Quad.

Here's a bit of  Beer Advocate Wisdom regarding the Belgian Quad style:

Inspired by the Trappist brewers of Belgium, a Quadrupel is a Belgian style ale of great strength with bolder flavor compared to its Dubbel and Tripel sister styles. Typically a dark creation that ranges within the deep red, brown and garnet hues. Full bodied with a rich malty palate. Phenols are usually at a moderate level. Sweet with a low bitterness yet a well perceived alcohol.

Here's some info from the Ommegang site:

Three Philosophers is a unique blend of a Belgian-style strong dark ale and Liefmans Kriek, an authentic cherry ale from Belgium. Cherry chestnut in color, it's opaque but not cloudy with full carbonation topped by a smooth, tan head. Flavors and aromas of roasted malt, molasses and brown sugar, dark fruits, brandied raisins and chocolate, Three Philosophers has notable sweetness with low hop bitterness. The mid-palate shows a soft malt center which gives way to a dry, warm, wine-like finish.
The strength and complexity of this beer make it a good candidate for ageing gracefully, as spicy sherry and port notes should intensify.


The Pinball, you ask?  Well, I spent last weekend (plus a Monday off) working on the Pinhead studios and one of the games that was resurrected was Klondike, a 1971 game manufactured by Williams.  The main feature of this game is a slot machine style set of reels on the playfield that you can advance for different rewards (kinda like Vegas!)  Get three Wagons in a row, hit the center hole and receive three extra balls. 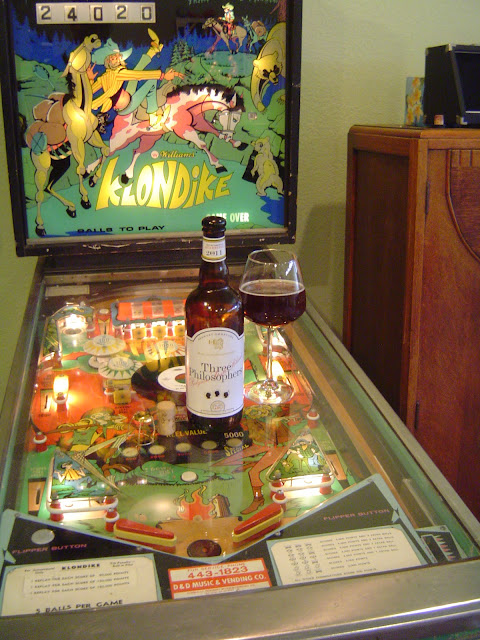