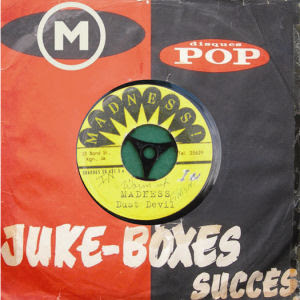 I picked up the 45 shown above last June on a trip to London at an HMV shop on Oxford street and it has been on the jukebox ever since. Dust Devil is the A Side and The Roadette Song sits on the B Side. The packaging is clever, as the sleeve has that "worn in" look even though it is new (wrinkled edges, creases, lifting ink) and the label has handwritten notes and a "fake" center cutout (the center is actually solid with only the small "LP" hole - common for most UK 45's). It is obvious that the boys in Madness had some fun modelling the art on the 45 after one (or a number) of the Ska 45's in their collection.
The music on the 45 is just as good as the artwork, as Dust Devil reached #64 in the UK singles chart and #1 in the UK Independent music chart on 17 May 2009. The B-side, "The Roadette Song" was originally recorded by Ian Dury with his band, Kilburn and the High Roads. The Madness cover version was originally intended to be on their 2005 album The Dangerman Sessions, Vol. 1.
The single is from the album The Liberty of Norton Folgate and here's a quote from the Mojo magazine review of the album:
"Thirty Years into their career, the Nutty Boys write a love letter to London. You can't accuse Madness of overdoing it; this is only their second album of all-new material since 1985's Mad Not Mad. Thankfully it was worth the wait. Named for a corner of the City of London that was legally autonomous until 1900, it's a themed, time-shifting salute to the capital in all of its infinite variety. Using the familiar pop-reggae sound of yore with singer Suggs, in tragi-comedian mood, it energetically represents the band's sombre, complicated side that doesn't always show at the hit-packed live gigs. In these songs marriages fail, things get worse as you get older and joys are fleeting, but it's depth not length that count in time, and ultimately, as on the blissful escape of Africa and the mystic title track's astonishment at a city "sprung up from the dark mud of the Thames," the results are uplifting. Still totally themselves, Madness have made the album of their career."
Here's the "Nutty Boys" on Later with Jools Holland performing Dust Devil -
Here's the "official" video of the song -
Posted by Red Wine Sunday at 2:03 AM