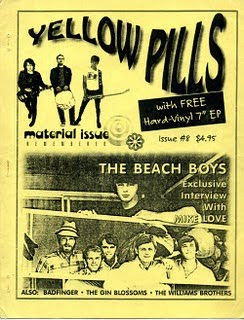 Jordan Oakes began publishing his seminal power pop 'zine, "Yellow Pills" in the summer of 1990 out of pure teenage puppy love for riffing, jangly guitars, fake British accents and harmonizing voices that ache with pimply adolescent yearning. As Yellow Pills began to notso-quietly circulate, Jordan quickly became the keeper of the keys (G and D, mostly) of all matters pop. So much so that he became something of a minor celebrity himself, greeted at Poptopia by Japanese teenage girls squealing "Yellow Pills! Yellow Pills!"

In 1993 Jordan curated his initial Yellow Pills release, the first of a series collecting power pop essentials from 20/20, Dwight Twilley, The Rubinoos, The Plimsouls, and five dozen others. The series rapidly became the sonic rosetta stone for a newer generation of poppers who, sans the skinny ties, held true to the power pop manifesto of harmony, melody and ringing, rocking 6 and 12 string guitars. The archaeological artifacts of power pop soon found a home in living museums of the genre from Teenage Fanclub to Green Day.

In the midst of this mini-renaissance, Yellow Pills seemed poised to be the banner under which this newer wave would plot its next invasion. But, like so many flags of the rock era, it flew only briefly, folded without ceremony and put away like the record collections of so many kids off to college. Twelve issues, four discs, and a nervous breakdown later, Jordan Oakes quietly disappeared into semi retirement and the ethnic, old-world landscape of South St. Louis.Read here. 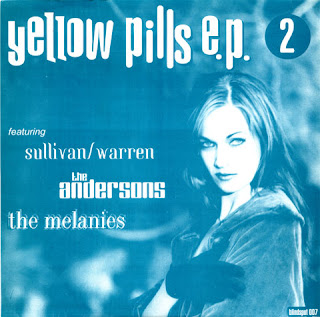 Billy Sullivan (Paul Pope Band) played with Frank Secich (Blue Ash, Stiv Bators) in Club Wow, he is better known for the songs he wrote with ex-ActionBrent Warren for the Scott McCarl's CD "Play On...".
You can grab the EP and the Fanzine in a RAR zip file by clicking on the title of the blog post (in this case YELLOW PILLS ISSUE #8 + FREE E.P. 2)
Recent posts have live recordings of Paul Collins and Squeeze. Also, Angelo (the blog's author) has posted albums by the likes of Graham Elvis, Popsicko, and LMNOP. He loves to post those obscure Power Pop compilations such as the excellent Pop greetings series.
Posted by Red Wine Sunday at 11:04 PM