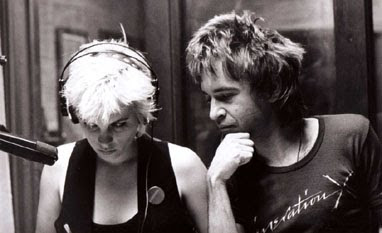 The image above is from an excellent website that I stumbled upon recently. It's called Punk Turns 30 and is the personal blog of Theresa K. In the photo above is Penelope Houston of the Avengers and the "Major of Sunset Strip" Rodney Bingenheimer
In her words "I have always been a photographer. When punk rock happened in my native Los Angeles, I captured it. My photos appeared on record sleeves like The Germs "Forming" and in magazines like Lobotomy, Creem, Rolling Stone and Playboy. Here are some photos and memories from those days"
Be sure to dig into the archives, as it contains tons of great photos and stories
Here's an example:
http://punkturns30.blogspot.com/2007/09/giving-west-coast-punk-its-due.html
An excerpt from the link above -
On the final date of the Sex Pistols 1978 tour - their only tour of the USA as the line-up that included the late Sid Vicious, local bands opened the Winterland show. The Nuns and Avengers opened. The two local bands did a phenomenal job on their home turf despite all the pandemonium that accompanied the presence of the Sex Pistols. In my opinion, The Avengers' pride and convicted performance stole the show. That's not saying the Sex Pistols were overshadowed...not at all. You had to be there to understand just how great the Avengers were. Thanks to the advent of YouTube, people who weren't there (and who weren't born yet!) can witness the Pistols' performance:
The youtube link on the Punk turns 30 site references a clip that has been pulled down, so I found that clip above as a replacement.
Her links are great too - Punk 77, The Clash Blog and Alice Bag.
Don't miss her Punk Rock FAQ in Pictures - great photos of the Last, 20/20, Nick Gilder and Blondie.
Posted by Red Wine Sunday at 4:25 AM