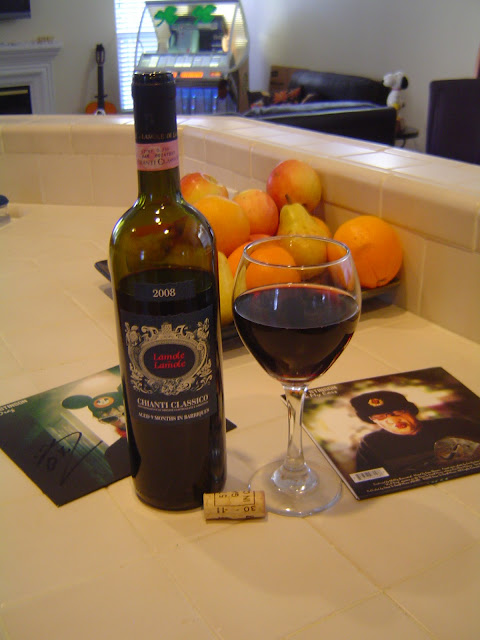 It's Italian night at the Pinhead Abode.  Got some red sauce bubbling behind me and the Meatballs are ready. Cracked open a Chianti to go with the meal.  This one I picked up over at my local Trader Joes for just under $10.  Now Chianti is usually characterized by mild acidity with a nice finish and the fruit expressing itself there at the end.  I might have to try another bottle of this example, as the Lamole is only giving me the Green Pepper and Stalk finish that I do not like.  Maybe it will open up after a few hours - if not - it will be going in the sauce.

Listening to the new Tommy Stinson 7" that I received in the mail this past Thursday.  I got 2 copies, one for me and one for a friend's Jukebox.  Both personally signed by Tommy.  Love those pre-order perks.  The B-side is not on his new album, but should have made it on there.  It would have been great right between Seize The moment and Zero to Stupid.  I hope that Tommy releases another 7" from the album, but hey, I would like to see him release the whole album on 7"