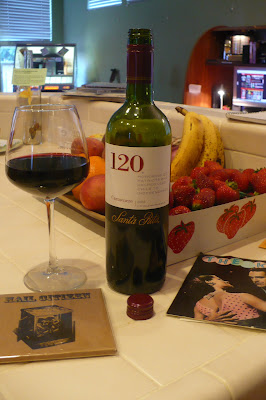 The back label reads:
"According to legend, 120 Patriots, exhausted after a long, hard battle during the fight for Chile's independence, reached the lands belonging to Santa Rita. On that fateful night in 1814, these forces of liberty found refuge in the estate cellars. Today, within these same cellars, our award winning 120 wines are crafted to honor their heroic character."
Wow - great stuff - now I wonder if those Patriots found some wine with their refuge! Maybe they "took refuge in the wine"
Not a bad wine for $7 at BevMo. Reminds me a bit of Zinfandel and now I want to explore a bit more of this Chilean grape juice.
Posted by Red Wine Sunday at 4:36 PM