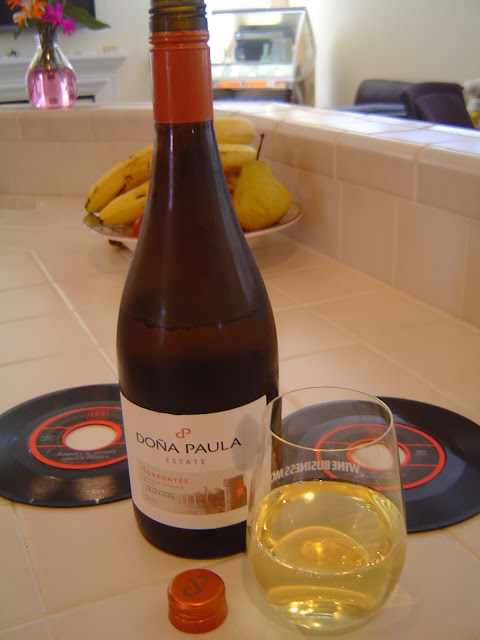 Cracked open some refreshing Torrontes this sunny afternoon to keep me company at the grill.  This one comes from the Dona Paula winery.  The grapes are sourced from the Salta region of northern Argentina.  If you have never tried a Torrontes, I can describe it as a cross between a Gewurztraminer and Moscato, but a bit drier and balanced with great orange blossom aromas and peach and apricot flavors.  Perfect for a hot late spring day.


Here's some info on Torrontes from the Wiki - Torrontes

Torrontés is grown throughout Argentina and its acreage is steadily increasing. Part of its increase in numbers comes from the increase in Argentine wine exportation where the grape has found considerable success in the United States, United Kingdom and aboard but also from a better understanding and identification of the different Torrontés varieties that allow for better accounting of plantings. For most of its history (including into the late 20th century) Torrontés lagged behind Pedro Giménez and Ugni blanc among white grape varieties in Argentina.[2] But by the early 21st century, declining plantings in those two varieties and the growing popularity of Torrontés allowed it to surpass them and become Argentina's most widely planted white variety where it continued to be as of 2008.[4]
The different Torrontés varieties have developed niche in different areas of Argentina. Torrontés Riojano is widely grown in the La Rioja and Salta provinces of northern Argentina and is, in fact, the single most widely planted variety (both red and white) in La Rioja. In Salta, the grape is often planted in high altitude, sandy vineyards that are often more than 1,600 meters (5,250 feet) above sea level. Here, the harsh growing conditions allow the variety to attain high acidity and assertive flavors.[4]
In the arid San Juan province, Torrontés Sanjuanino is found but is planted to a much less significant amount than Torrontés Riojano. Torrontés Mendocino is, by far, the least widely planted variety and is mostly found in the southern province of Rio Negro.[2]

Here's some propaganda from the winery website - Dona Paula

Intense golden yellow color. Delicate and complex aromas of jasmine, orange blossom, tropical fruits, and muscatel. In the mouth, this wine is fresh, balanced, persistent, with good volume and acidity.

This Torrontés comes from the foothills of the Andes Mountains, in the north of Argentina, at 1,700 meters (almost 5,600 ft) above sea level. The soil is sandy and rocky. The climate typically presents hot days and cold nights, with a considerable temperature variation. Drip irrigation and espalier trellis system are used. Harvest takes place in three different moments: in February to obtain good acidity and freshness, in March in an attempt to get floral notes, and in April so as to obtain tropical fruits aromas. At Doña Paula, our vineyards have always been managed using sustainable agriculture practices.

Grapes are gently destemmed while SO2 is added to avoid oxidation. The juice is separated from the skins, without pressing, and fermented in small concrete tanks at low temperatures.

Have a great week - Cheers!
Posted by Red Wine Sunday at 5:49 PM